”Veli Kujala is an archetype of a modern musician, in whose character composing, improvising and crossing borders are all well presented.” Mats Liljeroos, Hufvudstadsbladet | ”And a tip of the hat to the on-stage accordionist Veli Kujala for a standout cameo in Hamlet's scene with the Players.” David Wolfson, Bachtrack.com (Review of The Metropolitan Opera's Hamlet) | ”Stunningly performed by the composer, Veli Kujala’s Accordion Hyperoriental, the fourth part of Hyperchromatic Counterpoint (2006-09), was one of the highlights of the fabulous evening.” Jari Kallio, Adventures in Music | ”Props must be given to accordionist Veli Kujala who musically carried an entire scene on his own.” David Salazar, Operawire.com (Review of The Metropolitan Opera's Hamlet) | ”The entirety is convincing, newest and most interesting music of our time… The music of Veli Kujala resonates in a startlingly fresh and uncompromisingly original way.” Ville Komppa, YLE Radio 1 | "Kujala’s bravura performance with an accordion capable of quarter tones in Mononen’s Satumaa added a thrill of off-key chaos." Music OMH (review of Tango Prom 70 concert at the BBC Proms) | ”...the Kujala duo shines in the Sonata, delivering it with breathtaking virtuosity and nuance.” Patrick Hanudel, American Record Guide | ”It is always a big pleasure to listen to the great Veli Kujala on the accordion” Médéric Collignon, Citizen Jazz | ”Accordionist Veli Kujala’s debut concert at the Sibelius-Academy offered exactly what a debut concert is best to expect: brilliant musicianship, fine works and entertaining program.” Samuli Tiikkaja, Helsingin Sanomat | ”The composition DAI presented wonderfully the colorful soundscape of Kujala’s music, which is sometimes gushing, graceful, mystical, sneaky, creepy, hard, clear, blinding bright.” Hanne Orrenmaa, Ilkka | ”Kujala played brilliantly on accordion… I would like to know if anybody in the audience had ever before heard such an unbelievable soloist on this instrument.” Östgöta Correspondenten | ”Kujala proved to be adept at all styles and made the accordion a more sophisticated instrument.” Seattle Post-Intelligencer 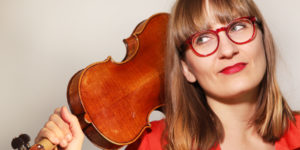 Eriikka Maalismaa and Helsinki Phil conducted by Osmo Vänskä played tremendous premiere performance of my violin concerto ’Auseil’. It was filmed and recorded by the Finnish Broadcasting Company and can …